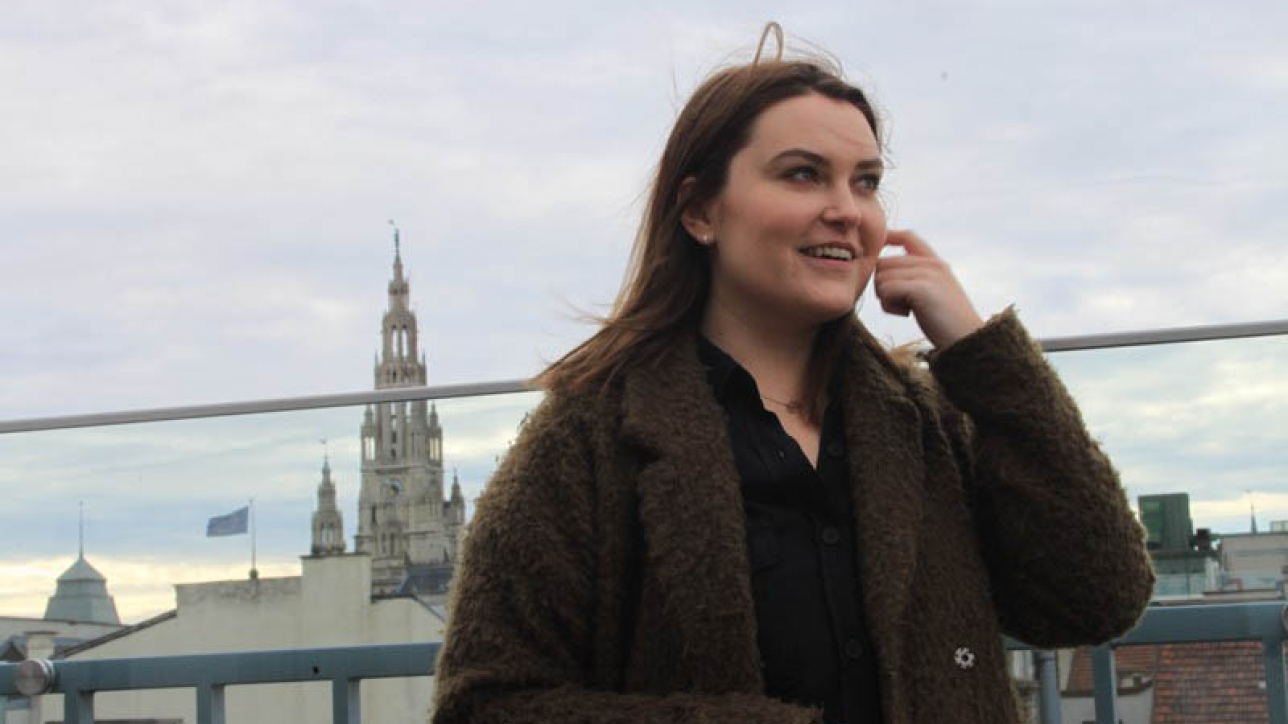 The setting for this interview is the 6-stories building of NIG (Neues Institutsgebäude) on Universitätsstraße, where, among others, the Institute of geography is located. Today we are meeting Agnes Matoga, a graduate from spatial planning at TU Wien and Uni Wien, who’s currently finishing her master thesis on the Governance of temporary use. Having her focus on urban research, she just finished a paper on “How media shape the perception of temporary use?”, which she will hand in at the ASEOP Young Academics Conference this year.

P: When did you first encounter temporary use?

A.M: I first encountered temporary use about a year ago. I was working in an office in “Viertel-Zwei” as an assistant of the neighborhood management team. As you might know, this big temporary use project was taking place and at the beginning of this project I met Lukas Böckle from NEST and that’s how I got interested in temporary use. 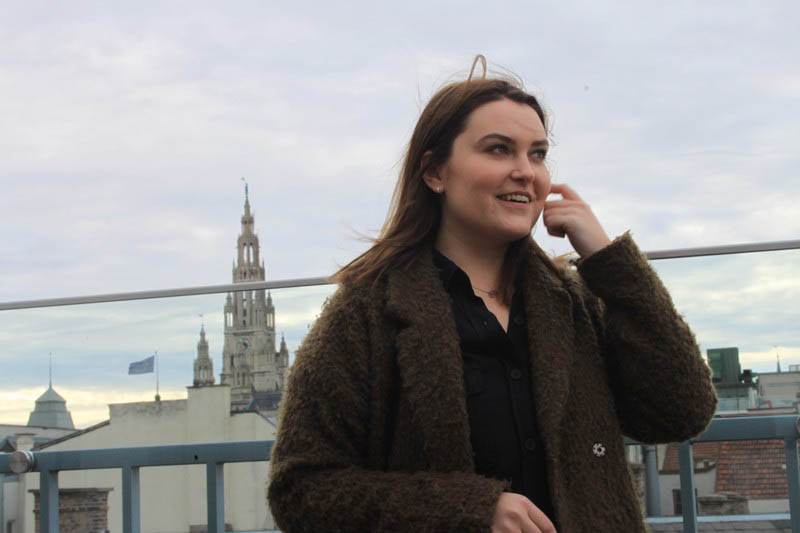 P: Why did you start dealing with temporary use?

A.M: First of all because as I was working in Viertel-Zwei. Moreover, because I was in Germany, in Leipzig and I realized that the take on temporary use there is completely different than in Austria. So I started questioning why it was like that if it was only the historical background that shaped the evolution of temporary use in Germany. I started to ask myself: who are the actors, that are involved in the temporary use, what are their networks, why are they involved, and sort of started to compare Vienna and Leipzig, which was my main interest.

P: How would you describe temporary use in 3 words?

A.M: The first word is necessary. I think, especially in Vienna, temporary use is very necessary, because of the problem of vacancy. So it is a solution for a certain amount of time. Social innovation, in a sense, that temporary uses are using an instrument in urban planning and not as much informal and bottom-up initiatives anymore. Especially in Germany, they are implemented in urban development plans. And the third is win-win with a question mark at the end because I think we still have to be very careful with temporary uses as well. So they are not intentionally being used to upgrade the neighborhoods, make profit and open up the discussion of gentrification.

P: Why did you choose the topic “How media shape the perception of temporary use” for your paper at the AESOP Conference?

A.M: The paper deals with how media portrayed temporary use, especially daily and weekly newspapers because I was noticing a lot of press articles on temporary use and I kind of started to dig deeper and started to read what was actually written about temporary use. I took the period from 1990 to the end of 2016. 1990 marking a point in Europe which was really crucial for the development of housing and vacancy. So looking at all of the articles that were published in this period and what is really interesting is that the first article in Vienna was published in 2005 and until 2010 there were just a couple of articles, about three, eight at the most. Since 2010 we can see a growth in the amount of articles, which are being published on the topic of temporary use. Now we can almost see a gradual growth in articles and 2010 was also marking the point where the government decided to implement an agency for temporary use in Vienna. So looking at the quantitative side of the analysis. Looking at it qualitatively, we can see that a lot of the articles are actually mentioned with a connection to occupation movements in Vienna, like the Amerlinghaus, WUK or Arena are mentioned quite frequently, which is not ideal because we have to differentiate between occupancy and temporary use, because the intention is completely different. It is not ideal for people to read these articles, as occupation is such a sensitive topic and if you start to think of temporary use as occupation, then, of course, people won’t engage in projects like this.

A.M: I think especially the government deciding on an agency for temporary use is the main reason for articles starting to pop up and especially because this agency was implemented in in 2015 or 2016, so it took 6 years for its actual implementation. Furthermore, there are all these projects right now, like Packhaus, Birdhouse, Krieau, 365 Foxhouse. We have a lot of projects since 2010 and I think this is the main reason that people start to get conscious that there is something happening and that it is not usual planning.

P: Can you see a distinctive change of the perception of temporary use? Like negative, in the beginning, 2013 extremely positive, 2014 denied support of the city.

A.M: I don’t think we can really say that there is a certain amount of articles just in one period of time that are just addressing it in a negative way, but there are also those articles that address occupation until now. So not all articles nowadays talk about it positively. They don’t only address temporary use, but dig deeper like the history of temporary use and of course they then have to mention occupation. It really differs from article to article, a couple of articles are good, others mention occupation as a main topic and temporary use just as an remark.

P: Are there difference between the various newspapers in Austria?

A.M: I think the biggest difference is in the “Falter” articles, which are very long, and they have done the research very well and they portrayed temporary use in a almost scientific way. They say what’s the positive, what’s the negative. Whereas articles in “Kronen Zeitung” or “Kurier” are mainly focusing on just the negative or just the positive, so Falter articles are really well written and you can see that.

P: If you think of a temporary use project, what’s essential for success?

A.M: I am quite new to temporary use and have not experience a lot of projects, but I think to be successful you have to be brave, both the property owners and the users as well to engage in such a new form of use. Transparency, a transparent agreement is very important to, which is why associations like paradocks or NEST are very essential.

P: Where do you think is potential for temporary use development in the city of Vienna?
A.M: One of the main challenges Vienna is facing right now is the vacancy of ground floors. I think that’s a potential for development of temporary use, because projects like Das Packhaus or Birdhouse are very big buildings. Ground floors are usually small places.  It’s very essential to do something there, because they are vacant, unattractive, they add up to neighbourhood’s safety and vitality. So that’s one of the biggest potential that temporary use could develop to. Secondly, as the scene of temporary use is starting to develop in Vienna, there are a lot of politicians to be convinced that informal and bottom-up initiatives are actually also good for urban development and they start to allow informal uses. In Vienna there is a law, there is a regulation for everything, maybe that’s a reason why Vienna is so late to the game.

P: Do you think the development is positive?

A.M: There is always positives and negatives to any situation, I think. It is just about how we are going to deal with the development. Not just see it as something negative because it was different in another period of time.  We have to adapt to new developments.

P: If Vienna would be a person, how would it be like?

A.M: First of all, I think Vienna would be a woman. Then it would be quite shy and not very innovative or spontaneous, but more thoughtful and even strict (looking at politics). It is kind of the big brother or big sister that is watching over its little children, which are the people of the city. Allowing things, not allowing things, very regulated and though through.

P: How do you see temporary use in 10 years?

A.M: I hope that temporary use gets more credit for what it actually does and it’s not so easily slipped into the discussion of occupation and gentrification. In the end, I think urban planning has to become more flexible. We are in a growing city and Vienna is growing really fast. Urban planning has to adapt to different developments quicker than it used to. Temporary use is quite a good reflection of this quick adaption in temporality.

„I hope that temporary use gets more credit for what it actually does and it’s not so easily slipped into the discussion of occupation and gentrification….“

P: What do you think is the future of working?

A.M: We can see it right now, that e-Learning is starting to get more and more implemented in schools and I think this going to be represented in work as well.  We won’t need as much teacher, because everything is going to be possible in the future. Social media is going to play a big role in the future of working. The “classic worker” is not common anymore.

P: How do you think the future of working space will look like?

Anna Steinkellner is passionate about urban development. As part of her Geography degree at the University of Vienna, she did an internship at Paradocks to focus on temporary use and vacancy in cities. When not studying in Vienna, the 22 year old student explores the globe. Currently traveling in Indonesia, Anna loves seeing different places and cultures all over the world.

This website uses cookies to improve your experience while you navigate through the website. Out of these, the cookies that are categorized as necessary are stored on your browser as they are essential for the working of basic functionalities of the website. We also use third-party cookies that help us analyze and understand how you use this website. These cookies will be stored in your browser only with your consent. You also have the option to opt-out of these cookies. But opting out of some of these cookies may affect your browsing experience.
Necessary immer aktiv

Any cookies that may not be particularly necessary for the website to function and is used specifically to collect user personal data via analytics, ads, other embedded contents are termed as non-necessary cookies. It is mandatory to procure user consent prior to running these cookies on your website.